“[Lynch’s] proven record transforming organizations and realizing the growth potential of differentiated brands is ideally suited for Papa John’s as the company sets forth on its next chapter,” the company’s chairman and Starboard CEO Jeff Smith said. Due to the move, Papa John’s stock rose 3%.

Johnson & Johnson must pay $572m for helping fuel Oklahoma’s ongoing opioid addiction crisis. Judge Thad Balkman ruled on the case, the first of which against opioid distributors that has gone public. In fact, opioids caused nearly 400,000 deaths in the US since 1999. In Oklahoma, however, nearly 6,000 people have died due to overdoses since 2000.

During a seven-week, no-jury trial, lawyers claimed that Johnson & Johnson did not take the proper care in warning people against opioid abuse. Instead, due to heavy ad campaigning, they promoted the drug’s helpful effects while minimizing its addictive nature. Johnson & Johnson has denied wrongdoing, claiming that their claims were scientifically backed. Plus, they claimed that their drugs made up only a small fraction of the opioid use.

Oil prices dropped on Tuesday, following the stock market lows as China reduced hopes of meeting the trade deal deadline. Brent crude LCOc1 was down 3 cents a barrel at $58.67, while U.S. West Texas Intermediate crude CLc1 was up 22 cents at $53.86. “Oil is following the stock market lower on trade uncertainty,” said Phil Flynn, an analyst at Price Futures Group in Chicago.

Trump Says US and China To Resume Trade Talks

President Trump has said that the US and China will continue trade talks after tensions rose in Beijing. “China called last night… said let’s get back to the table. So we’ll be getting back to the table,” he said. On Friday, Trump increased tariffs on billions of dollars worth of Chinese goods. However, Beijing said it was unaware that any phone call took place.

Disney To Open 25 Stores Inside Targets

Disney and Target announced a deal that allows Disney to open stores inside Target locations. On October 4th, 25 stores will open, with more to follow in the coming months. The shops will carry nearly 450 separate items, with 100 of them previously only available at Disney stores. The “shops-in-shops” will open in major cities across the nation. This Week In Business: Slack, Tesla, and More 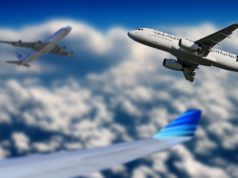